Jump to US Patents to see our Patents. The timing and strength of wind-driven coastal upwelling along the eastern margins of major ocean basins regulate the productivity of critical fisheries and marine ecosystems by bringing deep and nutrient-rich waters to the sunlit surface, where photosynthesis can occur. How coastal upwelling regimes might change in a warming climate is therefore a question of vital importance. Although enhanced land–ocean differential heating due to greenhouse warming has been proposed to intensify coastal upwelling by strengthening alongshore winds, analyses of observations and previous climate models have provided little consensus on historical and projected trends in coastal upwelling. Here we show that there are strong and consistent changes in the timing, intensity and spatial heterogeneity of coastal upwelling in response to future warming in most Eastern Boundary Upwelling Systems (EBUSs). An ensemble of climate models shows that by the end of the twenty-first century the upwelling season will start earlier, end later and become more intense at high but not low latitudes. This projected increase in upwelling intensity and duration at high latitudes will result in a substantial reduction of the existing latitudinal variation in coastal upwelling. These patterns are consistent across three of the four EBUSs (Canary, Benguela and Humboldt, but not California). The lack of upwelling intensification and greater uncertainty associated with the California EBUS may reflect regional controls associated with the atmospheric response to climate change. Given the strong linkages between upwelling and marine ecosystems the projected changes in the intensity, timing and spatial structure of coastal upwelling may influence the geographical distribution of marine biodiversity.

The impacts of climate change are felt by most critical systems, such as infrastructure, ecological systems, and power-plants. However,contemporary Earth System Models (ESM) are run at spatial resolutions too coarse for assessing effects this localized. Local scale projections can be obtained using statistical downscaling, a technique which uses historical climate observations to learn a low-resolution to high-resolution mapping. Depending on statistical modeling choices, downscaled projections have been shown to vary significantly terms of accuracy and reliability. The spatio-temporal nature of the climate system motivates the adaptation of super-resolution image processing techniques to statistical downscaling. In our work, we present DeepSD, a generalized stacked super resolution convolutional neural network (SRCNN) framework for statistical downscaling of climate variables. DeepSD augments SRCNN with multi-scale input channels to maximize predictability in statistical downscaling. We provide a comparison with Bias Correction Spatial Disaggregation as well as three Automated-Statistical Downscaling approaches in downscaling daily precipitation from 1 degree ( 100km) to 1/8 degrees ( 12.5km) over the Continental United States.Furthermore, a framework using the NASA Earth Exchange (NEX) platform is discussed for downscaling more than 20 ESM models with multiple emission scenarios.

Recent studies disagree on how rainfall extremes over India have changed in space and time over the past half century as well as on whether the changes observed are due to global warming or regional urbanization7. Although a uniform and consistent decrease in moderate rainfall has been reported a lack of agreement about trends in heavy rainfall may be due in part to differences in the characterization and spatial averaging of extremes. Here we use extreme value theory to examine trends in Indian rainfall over the past half century in the context of long-term, low-frequency variability. We show that when generalized extreme value theory is applied to annual maximum rainfall over India, no statistically significant spatially uniform trends are observed, in agreement with previous studies using different approaches. Furthermore, our space–time regression analysis of the return levels points to increasing spatial variability of rainfall extremes over India. Our findings highlight the need for systematic examination of global versus regional drivers of trends in Indian rainfall extremes, and may help to inform flood hazard preparedness and water resource management in the region. Natural hazards including floods can trigger catastrophic failures in interdependent urban transport network-of-networks (NoNs). Population growth has enhanced transportation demand while urbanization and climate change have intensified urban floods. However, despite the clear need to develop actionable insights for improving the resilience of critical urban lifelines, the theory and methods remain underdeveloped. Furthermore, as infrastructure systems become more intelligent, security experts point to the growing threat of targeted cyber-physical attacks during natural hazards. Here we develop a hypothesis-driven resilience framework for urban transport NoNs, which we demonstrate on the London Rail Network (LRN). We find that topological attributes designed for maximizing efficiency rather than robustness render the network more vulnerable to compound natural-targeted disruptions including cascading failures. Our results suggest that an organizing principle for post-disruption recovery may be developed with network science principles. Our findings and frameworks can generalize to urban lifelines and more generally to real-world spatial networks. 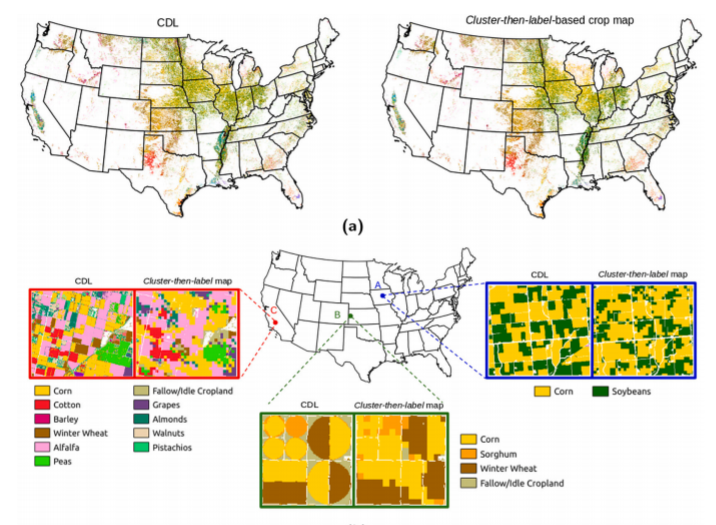 Timely and accurate knowledge about the geospatial distribution of crops at regional to continental scales is crucial for forecasting crop production and estimating crop water use. The United States (US) is one of the leading food-producing countries, but lacks a nationwide high resolution crop-specific land cover map available publicly during the current growing season. The goal of this study was to map crops across the Continental US (CONUS) before the harvest, and to estimate the earliest date of classification by which crops can be mapped with sufficient accuracy (90% of full-season accuracy). The study employed a scalable cluster-then-label model that was trained on multiple years of MODIS NDVI using ground truth data in the form of US Department of Agriculture (USDA) Cropland Data Layer (CDL) products. The first step in the crop classification was to perform Multivariate Spatio-Temporal Clustering (MSTC) of annual MODIS-derived NDVI trajectories to create phenologically similar regions, or phenoregions. The second step was to assign crop labels to phenoregions based on spatial concordance between phenoregions and crop classes from CDL using Mapcurves. Assigning crop labels to phenoregions was performed within ecoregions to reduce classification errors due to spatial variability in phenology caused by variations in climate, agricultural practices, and growing conditions. The crop classifier was trained and validated on the years 2008–2014, then tested independently on 2015–2018. Ecoregion-level crop classification performed better than state-level and CONUS-level classification. Pixel-wise accuracy of classification for eight major crops by area was around 70% across the major corn-, soybeans- and winter wheatproducing areas, whereas regions characterized by high crop diversity had slightly lower accuracy. Classification accuracy for dominant crops like corn, soybeans, winter wheat, fallow/idle cropland and other hay/non alfalfa improved with time as they grew, reaching 90% of year-end accuracy by the end of August over each of the four unseen years in the test period. For corn and soybeans, the earliest dates of classification were found to be much earlier in the central regions of the Corn Belt (parts of Iowa, Illinois and Indiana) than in peripheral areas. The ability to map growing crops may permit near real-time monitoring of the health status and vigor of agricultural crops nationally.

For a full list of publications, visit the PI’s Google Scholar page here.